Nick, Flying Quick Nick du Volant, heralds from top agility lines (Chris Libs's Volant Kennels) and herding lines (Peggy Richter's Kuymal Belgian Sheepdogs).  I picked  him up on May 24th, 2011 at 8 weeks of age.  He was born on March 29, so he is maturing into a handsome guy measuring over 26 inches tall, and weighing 60 pounds.

Nick is in training for agility and canine freestyle.  He was also my training partner in the Karen Pryor Academy Dog Trainer Program.  This was a Christmas picture.  He has a lot of girlfriends and gets along great with Dani, my Belgian Tervuren.


Here's a link to Nick's great aunt, Disco's sister, Bejay, who was competing and winning at the age of 10.  This is so impressive.
http://www.youtube.com/watch?v=D9EfH1_Jk_8&feature=youtu.be 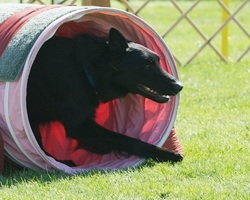 Nick made his debut in AKC agility on Sept 28, 2012 at a young 18 months of age.  He was an awesome boy and did everything I asked with competence and skill.  He won the class and was the fastest of the novice dogs competing.  We have a lot of training to do but it was a good experience and he grew more confident with each of 3 runs.  We didn't qualify on the other 2 courses but I was so happy with his desire to run and his ability to follow my cues (most of the time).  I couldn't be happier!  See more pictures below. All photos by Randy Gaines, Gaines Animal Action Photos, http://www.photoreflect.com/pr3/store.aspx?p=223617 .

I don't remember the kiss before our first run, but Nick is that kind of guy! 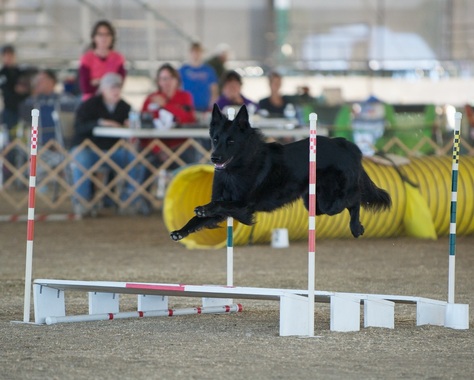 Here's some great pictures taken by Randy Gaines of Nick on course.  He ran just once a day as I want to be sure he is ready to compete without building in any potential problems.  He will be doing more runs from now on as he is becoming more steady in the trial environment and no issues have cropped up.  He is great on the start line, holds his contacts, works as a team member, weaves on first attempt most of the time, and is happy to get onto the course. Such a good boy!

This was Nick's 4th agility trial and he completed his Open Standard and Jumpers with Weaves titles and his Novice Fast title.  He has also been competing in NADAC and USDAA trials recently.  Below are pictures taken by Randy Gaines, http://www.photoreflect.com/store/store.aspx?p=223617. 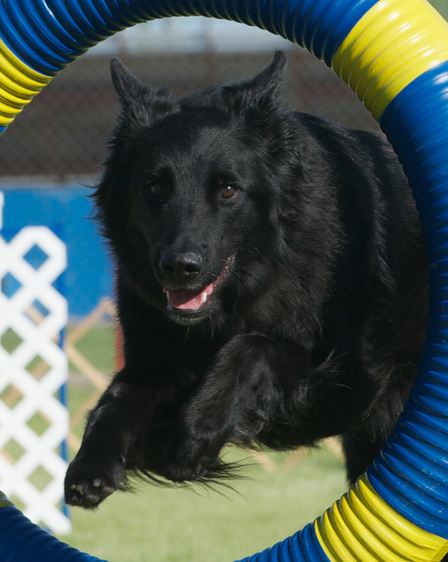 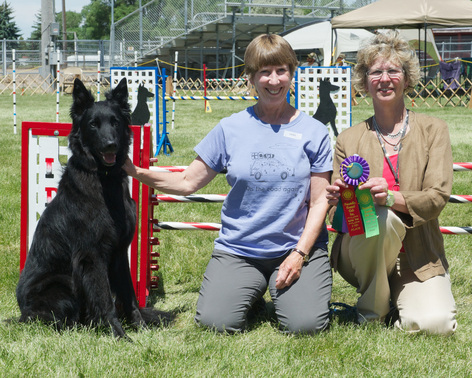 Nick, Flying Quick Nick Du Volant AX OAJ NF, completed his Excellent Standard title in Blackfoot at his 5th AKC trial weekend and while just 2 years and 2 months of age.  Our judge was Christy Bowers.  Thanks to Randy Gaines for the photo. 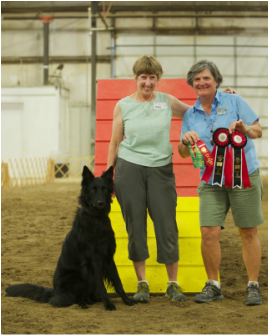 Nick then completed his Excellent Jumpers with Weaves and Open FAST titles at the ICCKC trial under awesome judge, Jan Skurzynski.  We hoped to earn our first Double Q but came up short during the next 2 days of our trial.  But he did get started earning MACH points already.

Here’s a picture of Nick with his new title ribbons, and Mary and
Jan.  Thanks Randy Gaines for the photo!

Nick had a great time at the trial and here's a few runs. 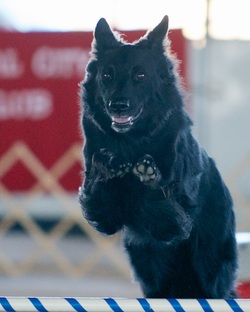 ICCKC's Agility Trial, Oct 11-13, 2013
Nick earned Double Q #2 and 64 speed points toward his MACH.  He is such a nice dog and is getting more comfortable in trial settings.
Pictures taken by Randy Gaines.
ICCKC Agility Trial, Oct 14, 2016
Nick and I moved to the preferred AKC classes in March 2016 although he is only 5 years old and is jumping great.  I moved to the preferred classes to give him a longer career and to allow us to jump in the premier classes at the lower jump height of 20 inches.  We completed our PACH on Oct 14, 2016 after just 8 trial weekends and 23 days of competition meaning he earned 20 Double Q's in 23 attempts.  And he usually won his class.  We also qualified for AKC's Agility Nationals coming up in March 2017 in Georgia.  We don't plan to go but feel honored to meet the criteria.  Thanks Randy Gaines, Gaines Animal Action Shots, for the great photos. 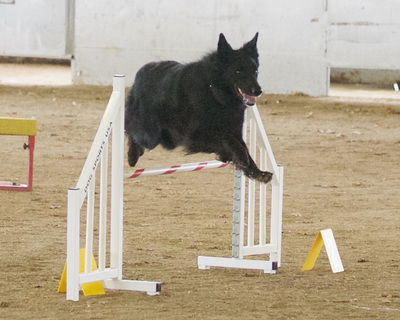 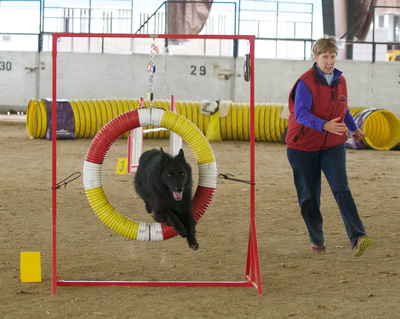 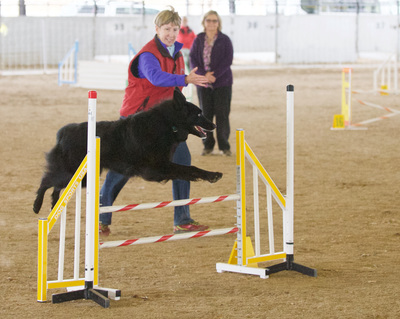 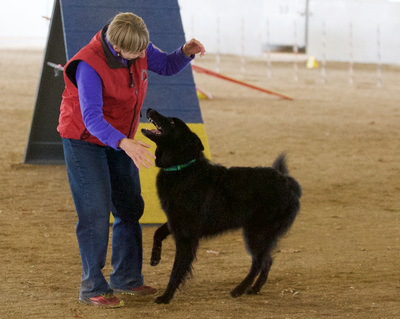 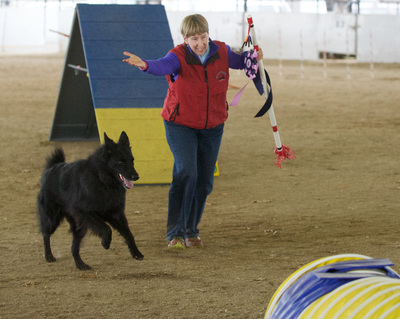 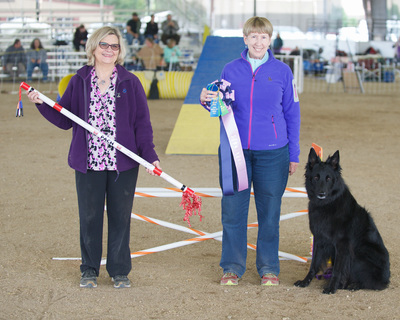 Nick and I have been doing canine freestyle and Rally FrEe.  Nick earned his first Rally FrEe title, Rally FrEe Novice Skills Test title, in Nov 2016.  We are working on future tities.  He has also been presenting at assisted living visits and fund raisers.


This is the link to Nick's Rally FrEe Novice Skills Test;
https://www.youtube.com/watch?v=6Rb3-RTZtDk

We will be working on more video submissions for future titles.